On the evening of Easter Sunday, April 12, 2020, a series of tornadoes hit Chattanooga, Tennessee, affecting many of the same areas that were hit by tornadoes nine years prior; and this time in the middle of a global pandemic. Lives were lost, homes and businesses destroyed, but resilience once again made its powerful presence known. Neighborhoods and agencies came together to offer help, hope and healing. And this year, there was one other significant difference: the deployment of a new State supported, and ICISF validated, Disaster Mental Health Strike Team. 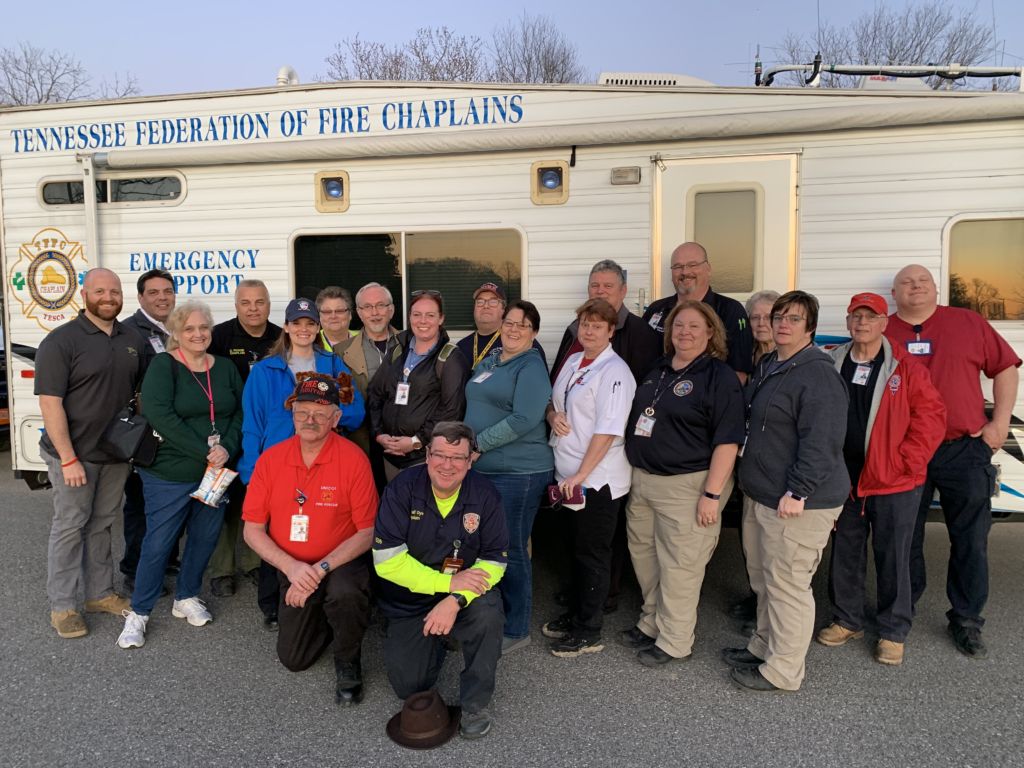 Tuesday morning, as initial rescue efforts were transitioning, I received a phone call. “Chaplain,” said Lieutenant Brad Freeman who serves as the Peer Support Team Leader for Chattanooga Fire Department, “Chief Hyman is asking what resources are available to support the significant mental and emotional trauma in the tornado zone?” I had recently been telling Brad about the new Strike Team, and we both knew this was the moment the team had been preparing for. “Let me prepare the request and get it to our Leader at the State,” I replied, “I should be able to have a team deployed by this afternoon.”

That evening, twenty-five team members from across Tennessee arrived. After an initial team briefing, including safety guidelines surrounding COVID-19, we organized into 12 teams of 2 (and 1 command staff), each assigned a specific area in the tornado affected zone. Over the next 5 days, with the help of 10 more team members, this group offered 1,378 individual crisis interventions and two group interventions, serving more than 1,400 people in the affected area, and making 65 productive referrals.

In summing up her experience, Dr. RoseAnne Coleman, who serves as a Chaplain with Perryville Volunteer Fire Department, wrote, “Together our shoulders are broad enough to carry these folks’ burdens in a time that might be the worst in their lives. What a privilege we have to help others – even if just for a moment… No one wants a disaster. However, when there is one – and there always will be one somewhere sometime – I am honored to be a member of the TNDMHST [Tennessee Disaster Mental Health Strike Team].”

Similarly, Yram Lopez, a retired district Fire Chief who now serves as Chaplain with Shelbyville Fire Department shared, “In the midst of a pandemic, where protocol called for isolation and separation, this group stepped forward to come alongside their fellow Tennesseans. I am forever impacted and grateful to be a part of this moment.”

The journey to respond in this way is filled with lots of training, team building and logistics planning. After more than ten years serving in this capacity, I am so grateful to see our new partnership with the State of Tennessee is helping make our response even stronger. “That we used to do this on our time and our own dime and now we have State support makes it run so much smoother. We don’t have to worry about logistics nearly as much. We can concentrate on serving the people in need.” says Team Chief and ICISF Instructor Paul Trumpore.

This partnership began in January 2017, when Ken Tartar, Regional Hospital Coordinator over Emergency Preparedness with the Tennessee Department of Health, asked about crisis response. He was familiar with my work with the local CISM Team and the Tennessee Federation of Fire Chaplains. While our state had a previous Disaster Mental Health Plan, because disasters don’t happen very often, the response model didn’t provide a way for responders to stay connected or fresh in their skills. Ken was asking what wisdom our current model of crisis intervention might offer to a state supported team. 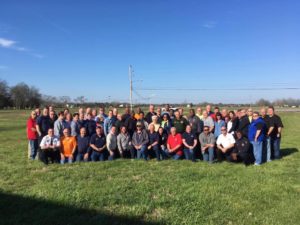 Over the coming year we began formulating a proposal. We wanted to combine our local team abilities to respond with the existing network of teams and chaplains around the state. This would create a unified team that is ready to respond to disasters, primarily because they are organized regionally and available locally. A state supported team of this type could train more often and keep their skills fresh by responding to smaller incidents at the local level. Our proposal included an extensive application process, a state funded training academy, two follow-up trainings, and regional quarterly meetings. It also included state funds to cover expenses when the team is deployed to disasters.

With approval for a trial run from the State of Tennessee, we trained our initial team of 70 people in March 2019. We also organized various roles and levels of leadership, including executive and regional leadership from across the state, unique positions for dispatch, reporting and training, as well as a specific group of licensed mental health professionals.

We received our first request for services the day after training completed and dispatched “Event 1” for a Critical Incident Stress Debriefing (CISD). “Event 2” was a follow-up individual crisis intervention the next day, and “Events 3, 4 and 5” came as the result of different incidents over the next ten days. Currently, our team has responded to 62 events, including 2 disaster deployments. By the end of 2019, we received a five-year contract from the State of Tennessee with funding to recruit and train additional members each year. Our second training academy took place in January 2020, bringing our current team membership to 101. 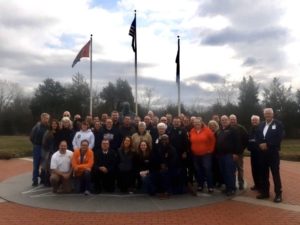 The tornado in Chattanooga was our second disaster deployment. The first came as the result of another set of tornadoes a month earlier in Davidson and Putnam Counties.Within 2 hours of dispatch, 20 team members were in route, and before the end of the week-long deployment, 50 team members would directly serve more than 1300 people in those communities. In addition, 22 other members of our team did not deploy because their home, community or agency was affected. However, many of them were active in other forms of crisis intervention in their own communities. The statewide nature of our team allowed them to serve where they lived and also supported them in their own need! 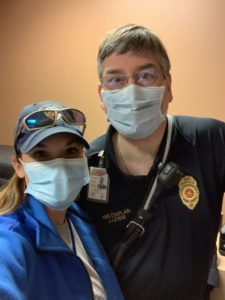 While many of our crisis requests are with First Responders, both recent disaster deployments had a significant focus on the general public. In Putnam County we received 28 requests for services, which included 12 group interventions for local agencies. Included in the list of agencies were a group of funeral directors, a group of civilian search volunteers and three groups of hospital staff.

“When we would identify ourselves as the Tennessee Disaster Mental Health Strike Team, most folks relax and even smile, saying, ‘Thank you so much for coming to check on us. It is so good to talk with someone other than an insurance adjuster or tree service or contractor or another neighbor who has lost everything!’” shares RoseAnne Colemen.

After talking with an ederly man impacted by the tornados, and helping him dig a hole so he could put up a new mailbox to “at least” receive his mail, two team members shared that he was remarkably more relaxed and simply said, “Now I can sleep.”

“It never ceases to amaze me when we go on these operations how little things that are said or done make such an impact,” said Martha Brockman with Clarksville Fire Rescue.

We are so grateful for this partnership with the State of Tennessee and the ways it strengthens our mission after traumatic events and disasters. The efficiency, effectiveness and overall service of the team has profoundly increased our ability to care for others in crisis. “We are blown away by all you guys have done. I honestly cannot believe how much you all were able to accomplish in such a short period of time. We are so thankful for you all!” shared Lieutenant Freeman. 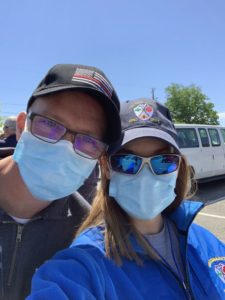 When Chattanooga was hit with tornadoes in 2011, our teams were allowed to work on our own. This year we were officially requested, supported and working side by side with the state. Additionally, in 2011, many on our local team were impacted by the tornado or involved in emergency response, and the volume of requests felt overwhelming. This time around, having an equipped team of people from across the state, who were trained together and could quickly deploy helped us provide a significantly stronger and healthier response. At the end of the week though, while most were physically worn out, we were also mentally and emotionally energized because of the support we had surrounding us!

Dana Townsend, a licensed Mental Health Provider on our team sums it up well saying, “I’ve spent the last four days watching different groups of people with different strengths come together as a team, digging deep and helping a community of people find comfort and support. Because of this, people whose needs aren’t as obvious as others were helped. Mental health needs oftentimes are hidden, silenced in the immediate and only emerge once the dust has settled. This team helped those silent needs be met sooner rather than later.”